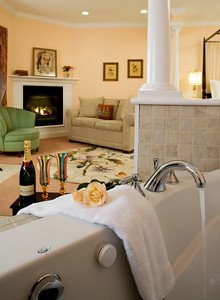 I love every time this happens.

For the Valentine’s Weekend, Randy and Heather checked in. They’ve stayed here twice before, in our king suites. This morning at breakfast, Heather held out her hand and showed me a new addition to her finger, a beautiful engagement ring! I asked Randy where he had proposed…and they said in their room, the Rosalyn Elkan Suite.

I am estimating this is the tenth time or so that we have hosted couples who have become engaged here. It really makes us proud that we have played a tiny role in such an important milestone in their lives. Susan and I were engaged in New York City under a streetlight about midnight on the upper East Side. That was not my plan.

I had an engagement ring in my pocket and I had flown Susan to NYC from Macon, GA to give her the ring at Studio 54 (this was 1978). Unfortunately, there was a large crowd at the door and we did not seem to pass the minimum “coolness” criteria from the doormen. Susan had no idea I was looking for the right place to propose, and we tried about four places before I gave up. One place was too dark, one had a cover charge too high. Another wasn’t located where we were told. I wish I had had a better Plan B.

At Hampton Terrace, you won’t need a Plan B. Let us help make this important occasion what it should be.