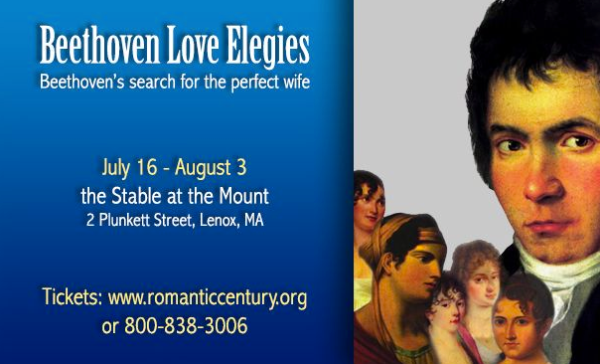 Let’s combine a few of our favorites:   Beethoven, Edith Wharton’s The Mount, and Deborah Grausman – the uber-talented performer/impressario who stages “Broadway in the Berkshires,” and always allows us to host the after-party at Hampton Terrace.

From this point, I will quote directly from a blog by Seth Rogovoy, who puts things so well.  I shall not try to improve…

(LENOX, Mass.) “Beethoven Love Elegies,” a dramatic program interweaving a script drawn from Beethoven’s letters and diaries and accounts by his contemporaries with performances of some of his greatest known works, will be performed by the Ensemble for the Romantic Century (ERC) as a fully staged theatrical concert at the Stables Theatre at The Mount for 12 performances from Wednesday, July 16, 2014, through Sunday, August 3, 2014. 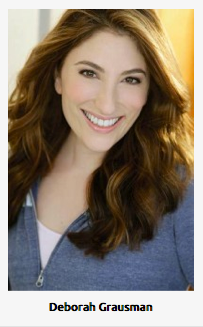 “This script is very dear to my heart,” says Eve Wolf, founder and executive artistic director of ERC and writer/pianist of “Beethoven Love Elegies.” “It is so moving to witness Beethoven at this younger age when he was boisterous, flirtatious, and sociable, and then to see his gradual descent into isolation when his deafness became more extreme. Beethoven was very spiritual and never lost hope, in spite of this adversity. The music reveals his struggle as well as his unstoppable hope and optimism.”

Depicted in a tragicomic script based on Beethoven’s letters and contemporaries’ recollections of the composer, “Beethoven Love Elegies” spotlights the composer’s attempts at finding an enduring love while growing increasingly deaf. The tragedy of his unfulfilled desire for a meaningful, and lifelong relationship finds its voice in his music. This production features recorded excerpts from Beethoven’s only opera, “Fidelio,” which represents Beethoven’s idealized view of marriage; his Variations on Ein Mädchen oder Weibchen (A young girl or a little wife), based on an aria from Mozart’s The Magic Flute; the “Moonlight” Sonata, which was dedicated to his piano student, Countess Giulietta Guicciardi, with whom he fell in love; the “Ghost” Trio, which contains one of the most profoundly moving slow movements in all of Beethoven’s works; and rarely performed Lieder that express his inner emotional drama (these include Neues Liebe, neues Leben, a song about first love; Der Kuss, a humorous portrayal of a man who gets the kiss he wants from a girl who tries to resist him; and An die Hoffnung, Op.94, one of his most moving songs, which expresses the sustaining sweetness of hope amid despair).

Where: The Stables Theatre at Edith Wharton’s The Mount, 2 Plunkett Street, Lenox, Mass