Modern day visitors to the Berkshires follow in a tradition that was established at the end of the 19th Century, by Society players of the Northeast, who called this place home – at least during the summer!

Hampton Terrace is one of the “cottages” built by money industrialists and their social brethren in the post-Civil War era known as the Gilded Age. Dozens of these cottages, many of them quite opulent, and hardly what we would call a cottage these days, are still occupied or in-use. Hampton Terrace of course, is occupied as an inn – and has been since the 1930’s. Our property knows a longer history, however, as it was the site of Lenox’s first blacksmith shop.

Our neighbor, Ventfort Hall is occupied 7-days/week, year round, as a museum to the Gilded Age. Currently on display there, are the exquisite Gilded Age Fashions of the “Les Petites Dames Du Mode” (The Little Ladies of Fashion) exhibit. The exhibit features 59 “petites dames” or doll models sporting women’s fashions from 1855 to 1914. It is the culmination of 40 years of work, by John R. Burbidge, designer and creator and retired Senior Designer for the famed bridal house of Priscilla of Boston. The fashions will evoke a sense memory that you didn’t even know you had – for the “feel” of the era. 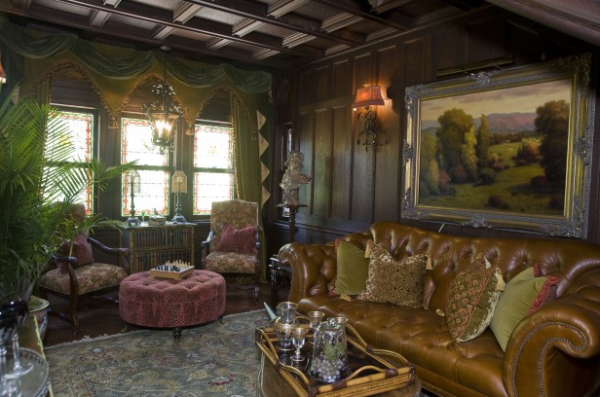 Ventfort Hall was originally the residence of George Hale Morgan and Sarah Spencer Morgan. The Morgans, who moved into the house in the early 1890s, were well-known New Yorkers, and members of a prominent banking family. The fortune that Sarah inherited from her banker father funded the construction of her grand home. After the death of its original inhabitants, the property went through a series of incarnations including life as a rental property (to families with names like Vanderbilt), a summer ballet camp, and a small hotel, until it was rescued for preservation and life as a museum.

Another of our Gilded Age neighbors? The Mount. Edith Wharton’s Berkshires home. The Mount is a property that hosts a variety of types of event. If you book a wedding there and need lodging for guests, we couldn’t be closer. Other events include literary events, Wharton-centered lectures and presentations, a summer lecture series, private library tours…and the gardens, the gardens are an absolute must-see. This year, the estate is celebrating the 100th birthday of Edith Wharton’s novel “The Custom Of the Country”. It is a unique celebration – an online serial, to replicate the original manner of publication of the work, in installments. “In addition to Wharton’s delightful prose, we will include commentary from Wharton Scholars, Mount staff, and others giving context and definition to one of Wharton’s most debated works.” – The Mount Website

This former residence of John S. Barnes, and Susan Hayes Barnes, was built in 1882. Captain Barnes was a Civil War naval officer. Their grand home is another Lenox destination. Though the home began its life saddled with contentious energy bred between Captain Barnes and his builder (said builder alleged that the Captain was rather unpleasant to work with), it is now a piece of the tranquil Cranwell Resort, home to a most luxurious spa, resort, golf and fitness center.

This formerly grand 1894 Lenox residence is now but a ghost, replaced by a place for spirit and reflection. It began its life as a residence to Anson Phelps Stokes and his wife, Helen Louise Phelps Stokes. Anson Phelps Stokes was an investment banker and Anglophile. Even the naming of the family followed English aristocratic tradition, by giving each of the children both of the names, Phelps and Stokes, without a hyphen, for a rather stately result.

Though Mrs. Phelps Stokes put much of her own design authority into the decorating of the home, the family did not spend a long time is residence there – Mr. Phelps Stokes had injured a leg while horseback riding, and had that leg amputated. The amputation prevented him from enjoying his country estate as much as he would have liked and so the house eventually fell into new hands. The last private resident of the home was Andrew Carnegie. Upon his death it was sold to a Jesuit order, while called the structure home until it burned down in 1956. A new building was created by the order, and that building is now home to Kripalu Center for Yoga and Health, a peaceful place to explore the mind-body connection.

CREATE YOUR OWN GILDED AGE TOUR

The Berkshires of Western Massachusetts website offers suggestions for an excellent, “Gilded Age”-themed tour experience of the Berkshires.

The Winthrop Estate, also located here in Lenox, MA is another property that may be of interest to those wishing to soak in the very feel of the Gilded Age. The Estate was originally a country retreat for the US Ambassador to Denmark, in 1875. However, its next residents were ones with an established history in the state of Massachusetts.  Early Winthrop family history includes ancestor John Winthrop becoming the founding governor of the Massachusetts Bay Colony. Robert Winthrop was the Winthrop to inhabit the Estate, along with his wife Kate (whose father was the first president of what is now known as CitiBank). Because it is not a museum or dedicated to an alternate use, visitors are able to tour and experience the home as a country home, as its original inhabitants did.