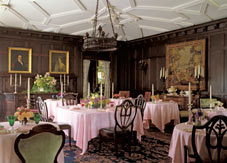 Guests of Hampton Terrace typically consider their dining experiences in the Berkshires to be a key ingredient of their stay.   So we spend a lot of energy making sure our guests’ choices are informed.

Our confirmations include a seriously edited-down list of the better local restaurants…a list based on our personal experiences, but also based on the fact that our guests have had literally over 15,000 dinners in the area….and we hear about them at breakfast.  We also keep copies of those menus in a binder in our front hall.

No doubt, the top of the list includes Blantyre, Wheatleigh, The Inn on the Green, and several other highly-rated Zagat choices.   Blantyre is located just one mile from us….and this week, their chef now belongs to a rarefied group of culinary craftsmen.

Christopher Brooks, Blantyre’s top chef for the past eight years, has received a Grand Chef Trophy. The award was presented last month by the International Congress of Relais & Chateaux at its annual gathering in Vienna.

The Relais & Chateaux association is comprised of 480 of the world’s finest hotels and gourmet restaurants.

The designation of Grand Chef is awarded annually to the “contemporary elite” of fine dining. This year, the honor went to Brooks and three other chefs from around the world.

For restaurateurs, the honor is tantamount to earning an Oscar for best director or a Pulitzer for commentary. Even for Blantyre — an establishment accustomed to racking up culinary accolades — the honor has special meaning.

“I was pleasantly surprised,” Brooks said in an interview with The Eagle on Friday.

Brooks credited his “dedicated team at Blantyre” and singled out Arnaud Cotar, his No. 2 man — or chef de cuisine — for special praise.

Brooks, who has worked in tony kitchens around the world, remains passionate about cooking. “It’s a love,” he said. “It’s a way of life.”

Born in North London, he spent much of his youth on England’s South Coast, where began his career at Chewton Glen, an exclusive hotel in Hampshire, England.

That’s where he served an apprenticeship, from 1984 to 1988, with chef Pierre Chevillard, whom he still credits with teaching him the fundamentals of cooking.

“He was the person who trained me, (and) I still look up to him today,” Brooks said.

In addition to the Grand Chef Trophy, Brooks has received kudos from the Zagat restaurant guides and Condé Nast Traveler.

Meanwhile, Blantyre is the No. 1 ranked dining establishment in the Berkshires, according to Zagat’s 2008/2009 Restaurant Guide. Forbes.com included the Lenox landmark on its “50 Best in the World” list, while Travel & Leisure listed it among “The World’s Best Hotels.”

Brooks’ recipes are included in a new book, “The World of Blantyre & The Cookery of Christopher Brooks. He and the book’s author, Claire Hopley, will sign copies at The Bookstore in Lenox on Dec. 21, from 2 to 4 p.m.

Blantyre is an extraordinary experience.   At Hampton Terrace we encourage our guests to “Turn Back the Clock to the Gilded Age” and that is true….but Blantyre represents a walk into a true Baronial castle, and the room rates there reflect that experience.  Off-season rates run from $600 to $1,300/night mid-week.   I won’t say an experience at Hampton Terrace, the #1 rated Lenox inn on Trip Advisor, will compare…but then again, we are charging roughly 15% of that.    So we encourage those of you who would like a Blantyre experience, to let us find a great room for you here, and then we’ll send you five minutes down the road for a “destination” meal.