Alan Menken and the stars of “Broadway In The Berkshires” weren’t the only cherished Broadway guests to join us in 2013. 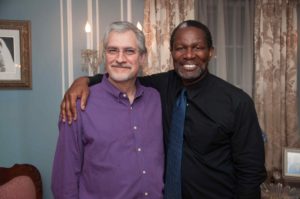 John Douglas Thompson is a frequent Hampton Terrace guest, a close friend, and a Broadway star. He made his Broadway debut as Flavius, opposite Denzel Washington in Julius Caesar in 2005, and later appeared as Le Bret in Cyrano de Bergerac, alongside Jennifer Garner and Kevin Kline in 2007.

In 2009, Thompson had a breakout year, playing the title roles in Othello at the Theatre for a New Audience, and The Emperor Jones at the Irish Repertory Theatre. Both performances garnered high critical acclaim, with the New York Times stating: “There may be no better classical actor working in the New York theater right now.”

He received an OBIE Award for his performance in Othello, along with a Lucille Lortel Award for the same performance. The New York Times lavished praise on him, calling him “one of the most compelling classical stage actors of his generation.”

He is currently playing the lead on Broadway in “A Time to Kill,” starring alongside Tonya Pinkins – you recognize her name from our previous blog post.