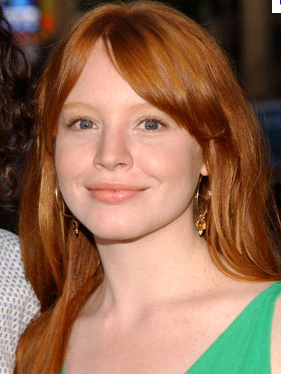 Before I get into this….congrats to our last featured Celebrity Guest, Ken Jennings, for his excellent but probably futile showing against “computer overlord” Watson.  Given that Watson can understand questions without hearing or reading…and can push his button at the speed of electricity….it is not surprising that both human contestants found themselves vainly punching their button for questions Watson was already answering.

But I am already off the subject:  interesting and/or famous people who have walked into our inn.   And that is exactly the story behind Lauren Ambrose.

One day a young redhead and her taller brunette husband came in, asking for a room.   They introduced themselves as Lauren and Sam…so I signed them up.   As this was happening, my daughter Lauren walked down the main staircase…and I introduced her…”Lauren, this is Lauren.” 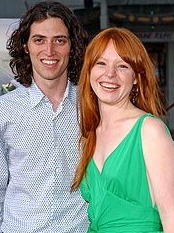 She went out the front door…and no more than 60 seconds later my cell phone rang.  “Dad!  Do you know who that is?”   I admitted I had no idea, and she told me that the girl at my front desk had starred in “Can’t Hardly Wait,” “Party of Five,” and other shows my 20-something daughter would know.

At that point in time (2002), she was a main character, Claire, in HBO’s  “Six Feet Under,” which had finished its first season.  So she was not on my radar.

But she and Sam stayed a couple of nights and we really got along well.   And she came back twice more.   During those visits they expressed a love for the Berkshires and a desire to have a second home here.   They had been married on the grounds of Tanglewood, and she is originally from New Haven, just a couple of hours away.   At some point later, they called us to come see a house they had found in South County…east of Great Barrington.  It was an 1800’s era “eyebrow” colonial..meaning the roof slopes forward reducing the second floor front windows to slits, resembling eyebrows over the first floor windows.

The house needed a lot of work.  As it turned out, my brother-in-law, Mike, was in the area helping us renovate portions of Hampton Terrace, so Mike went to work for Lauren and Sam.   Upon completion, we dropped in with a bottle of house-warming champagne.

Over the years, Lauren and Sam have often run into my daughter Lauren again…and her husband Brad, who spent a couple of years as the bartender at Allium…a favorite Great Barrington hangout.  Susan and I have seen them occasionally as well.

Lauren continues to do a LOT of film, tv and stagework, including Broadway.   I won’t go into that..but click on her link in the second paragraph and you will see her latest projects.   She also sings in a band which performs frequently in Great Barrington.   I guess in some respects she has become a “local.”   And we had a chance to be a bit involved in that.  A perk of our jobs.