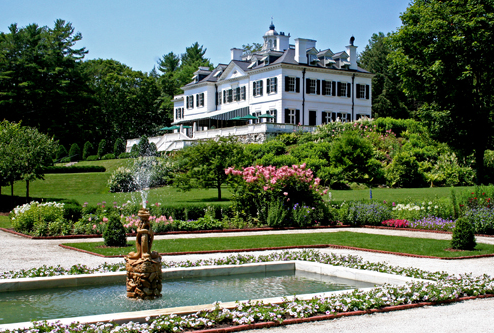 Many small towns have a significant mansion.   Lenox has about 5,000 residents, but it has 80+ significant mansions – all called “Berkshire Cottages.”  The term “cottage” is tongue-in-cheek as many of these homes have dozens of bedrooms.   Hampton Terrace is one of the smaller ones – and we have 14 original bedrooms.   The owners of these estates established and hosted the Lenox social season, which was a two-week period in early September.

These mansions were built mainly between 1880 and 1920, and some of the names are recognizable:   Morgan, Carnegie, Westinghouse, Vanderbilt, Tappan, Proctor, Sloane…

Significantly, one of the homes was built by Edith Jones Wharton, and its construction did not go unnoticed – mainly because as the home was being built, Edith was writing a book about it.   Called “The Decoration of Houses,” Wharton was setting herself up to be the Martha Stewart of her day, establishing a template for those Gilded Age industrialists whose new-found wealth had to be put on display.

Edith Wharton famously divorced her American husband (of the Philadelphia Whartons) and moved to Europe, after living just 12 years in her showplace.   She never returned, but her legacy in the home lives on.   Renovations began in 1997 and after tens of millions invested, the place is a showcase once more.  Her original library collection, which moved with her to London, remained intact and has been returned to her library shelves.

Obviously, the greatest thing about leaving a chronicle about the construction of your home, is that you give renovators a guide to putting it back together.  Additionally the house was well photographed back in the day.   So the renovation is as authentic as you will find in a restored historic home, and the gardens contain the same plants in the same places as the original.

The Mount is open daily from early May through October each year.   The tour of the home and gardens can be self-guided, but there are also group tours several times per day.

Hampton Terrace is located within a 2 minute drive, and many of our guests head to The Mount as part of their Lenox “must see” tour.    They also have a cafe on their back porch, a gift shop, and constant programming.