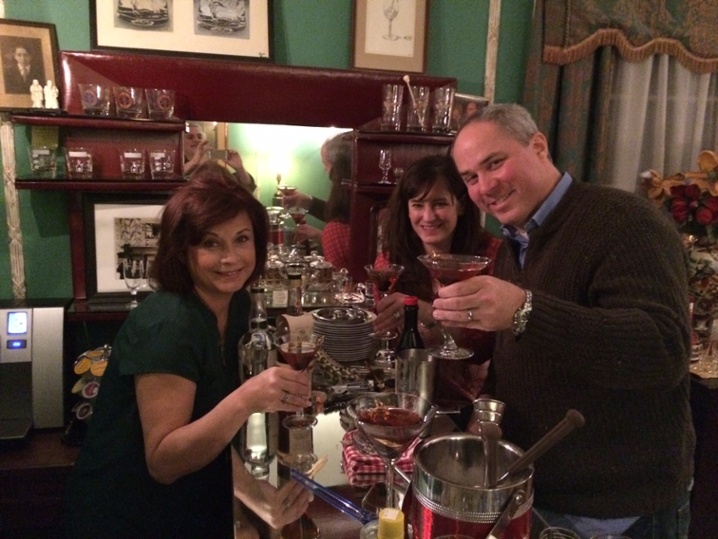 You just never know who you’ll meet at breakfast at Hampton Terrace.   Last weekend, I was having a conversation with a nice couple, who were celebrating their honeymoon here.   They had come in around 8 the night before from NYC and asked where they should grab dinner.   “I am kinda a foodie,” the husband had offered, so I recommended Nudel.

At breakfast, the couple quickly volunteered how impressed they had been with their meal, and comparisons 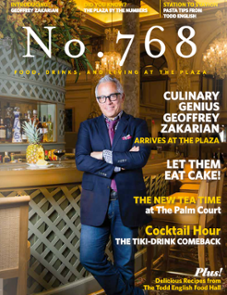 to Food Network Shows like “Chopped” and “Iron Chef” came up.   ..Names like Geoffrey Zakarian and Marcus Samuelson.   The wife offered that her husband had worked with them all.   It did not take me long to find out that her husband, Brian, is currently in a partnership with Chef Zakarian to open a new bar in the Plaza Hotel in New York, called The Palm Court.

It turns out that Brian Van Flandern has been called “America’s Top Mixologist” by the Food Network and has appeared on numerous shows, including Barefoot Contessa and Bar Rescue.   He had appeared recently on a panel with Marcus Samuelson (a “Chopped” judge and owner of the Red Rooster in NYC).

How does one become as famous and respected in his profession as Van Flandern?   …By being asked by “French Laundry” owner/chef Thomas Keller to run and create the bar menu at Per Se in New York – named one of the best restaurants in the world.   At Per Se, Brian’s bar creations were noticed by critics (his tonic and gin is still a featured item) and that led to a series of presentation-quality bar recipe books, such as “Vintage Cocktails” (which was named best bar book in the world and has sold 72,000 copies at $50) and “Craft Cocktails.”   “Kinda a foodie” the guy says…..   Yep, I’d say so.

So back to breakfast.   Brian asked me, “Stan, what kind of cocktail do you like?”  I responded that I like Manhattans.   Brian said….”Well, meet me at your bar before dinner and we’ll make a proper Manhattan.”

And we did.   Brian showed up late afternoon after a shopping trip to Nejaimes Wine Shop, where he bought Basil Hayden’s Bourbon, Carpano Antica Formula Sweet Vermouth, and Luxardo Maraschino Cherries (Italian).   I 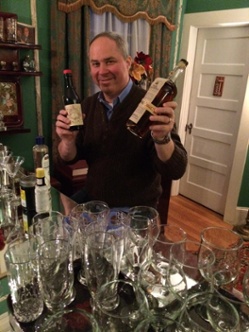 learned how to make a respectable Manhattan from the guy who has been named a Top Ten Bartender in the World.

2 parts bourbon and 1 part vermouth in a mixing glass. A dash of Angostura bitters and either a few drops of simple syrup or juice from the bottle of cherries.  Brian chose the cherry juice because it was high quality.  Place some large ice cubes in the glass and stir gently with a high ball spoon, so as not to aerate.   Never shake.   Strain into a martini glass.   The drink should appear viscous and full bodied.

And wow.   Smooth.   No bite.   Brian’s main point is that quality ingredients result in good outcomes.

It also did not hurt that we were enjoying ourselves around my grandfather’s bar from the 1930s, and we were using antique bar tools and glasses.

Just as my grandmother would have loved to have seen Alan Menken and John Williams play her Steinway….my grandfather would have enjoyed “America’s Top Mixologist” using his bar as intended.

And here is the punchline.  When Zakerian and Van Flandern began developing the new bar at The Plaza, they did so with a strong salute to Trader Vic’s which used to be located in the hotel.   Cocktails were at the 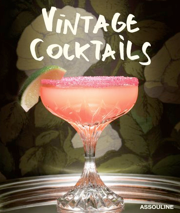 peak of all-time popularity in those days and they are making a comeback.   Brian and I were going through the drawers of my grandfather’s bar when we found…..drum roll…..half a dozen cocktail pamphlets from Trader Vic’s.   The actual pamphlets from the bar, describing the offerings.   We estimate they are from the 1950s.

Brian was predictably excited about this.   He invited Susan and me to meet him (and his wife Kelly – an executive at Mastercard) at the Plaza in New York and he asked me to bring the pamphlets.   He envisioned that possibly they could be framed and displayed there.   “On loan from Hampton Terrace,” I quipped.

What does Brian do for a living?   Besides appearing on Food Network shows, Brian’s company is hired by celebrity chefs, hotels and restaurants to design their bars, create unique cocktails, and train the staff.   He has been to over 40 countries.   Where do I sign up?