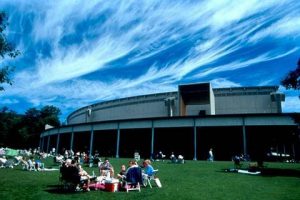 I bet you did not know that last summer Hampton Terrace was the Official Summer Home for Larry King, the voice of the Tanglewood radio broadcasts. If you live in the Boston area, you will know it soon, as the name Hampton Terrace floods the airwaves. In return for hosting Mr. King for the summer, we earned a schedule of advertising time on Classical 99.5 WCRB Boston, and we plan to use it over the next six weeks.

The campaign will promote our long weekend New Year’s Eve package, and the upcoming summer, as soon as the Tanglewood schedule is released.

WCRB also has a Classical Club Promotion, which will include a 2-night stay at Hampton Terrace, so tune in to the station for more details.

Hampton Terrace, the #1 rated Lenox inn according to Trip Advisor reviews, has been an inn since 1937. We have 14 rooms, an outdoor heated pool during the summer, and include full breakfast buffet. Currently, we are featuring a Romantic Weekend Special.