Sometimes one plus one equal four…which was the case 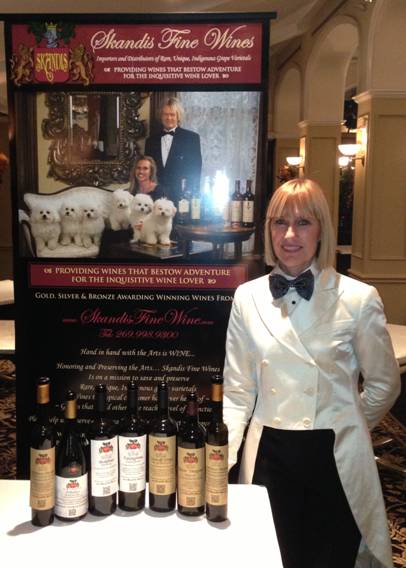 when Christine Skandis of Skandis Fine Wines and I began discussing the possibility of a wine tasting at the inn.   Christine, a former guest, imports rare wines from Italy, and actually discovered Hampton Terrace while participating in the Tanglewood Wine Festival.   She contacted me about a return trip to the Berkshires.   Meanwhile, I thought that the (University of) Virginia Club, located in the Yale Club of New York City, might be a great venue to host the event – and a way to get her, and by association, Hampton Terrace, introduced to a larger audience.

I have been a member of the Yale Club since 1996….a quintessential Gilded Age-era private club, located on Vanderbilt Avenue, next to Grand Central. There are tens of thousands of Yale Club members, including membership eligibility for those who also graduated from Virginia and Dartmouth. I contacted Nellie Black, Social Chairman of the Virginia Club, and the event ended up on the Yale Club calendar for November 29th, in the Rooftop Dining Room.

Attendance was limited to 60, and by the time the evening rolled around, there was a waiting list. I opened the evening by welcoming everyone, on behalf of Hampton Terrace, and giving away a weekend stay. Cathy Thomas, of Nashville, Tennessee was the excited winner.

The first wine was a sparkling Erbaluce di Caluso to set the palate. Then Christine offered a non -sparkling version of the same white wine.   Then, two reds, Canaveses Rosso, and Canavese Barbera.  Finally, a dessert wine, Erbaluce di Passito.

I personally liked the wines very much.  The whites had a hint of mineral, making them different from what I am used to – which is the point.   If a rare, heirloom wine tastes the same as everything else…what is the point? But I usually drink red, and I found both choices to be excellent.
Christine said she was “very pleased with the evening and the enthusiasm and compliments we received from the Yale Club members regarding my heirloom wine tasting.”  She went on to say that the Yale Club has asked her to consider pairing her wines with an actual dinner, and others at the tasting suggested she do similar events at the Harvard, Metropolitan and University Clubs. So, this might be

the beginning of something big.

Meanwhile, Skandis Fine Wines cannot be found in retail outlets.   The Yale Club asked her about the possibility of adding her wines to their wine list, so you may be able to find them there in the near future. For now, though, to enjoy her limited-supply wines, you would need to access them through her website.
And now, we’re back in the Berkshires. Heading to our part of the world soon? Contact us for a free rate quote.
Back to All Blog Posts