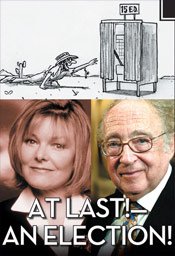 Tackling a range of issues ripe for parody, such as the battle for the presidency, Symphony Space’s Thalia Follies, curated by Artistic Director Isaiah Sheffer and featuring Jane Curtin, uses song, dance and humor to track the nation’s political landscape.

After many months of waiting and many more primaries, decision time has finally arrived and The Thalia Follies aims to make light of the build-up to the presidential election with songs like “This Nearly Was Mine” (as sung by Hillary Clinton) and “Between Barack and a Hard Place.” The show features a cast of performers including star of television and stage Jane Curtin, Ivy Austin (American Radio Company), noted jazz bassist and songwriter Jay Leonhart, singer-songwriters David Buskin and Rebecca Donner, acclaimed jazz stylist Marion Cowings, colorful faux country music ensemble The Chalks, author of last season’s award-winning off-Broadway play Red State/Blue State Gregory Jones, seven-time Emmy winning arranger and orchestrator, Musical Director Lanny Meyers and star of literary public radio Sheffer himself.

This is a great reason to visit the Berkshires this upcoming weekend and stay at Hampton Terrace Bed and Breakfast, the #1 rated Lenox inn, and one of only four lodging properties in the Berkshires recommended by the Michelin Green Guide.    We are 2 hours from Boston and less than 3 hours from New York City.

You will be catching us on the first weekend of our “off’season” and rates drop 30% from those in October.   You would also be eligible for our Romantic Weekend Special, which includes a $30 Gift Certificate to the local wine/gourmet food shop in Lenox, as well as full breakfast by candlelight.   Our king or queen fireplace/Jacuzzi rooms start at $189/night.   Call 800-203-0656 to check availability and to reserve.