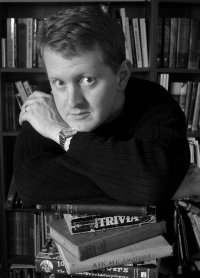 We’ve had relatively well-known people stay here before.   But this was different.   As someone who worked for Dick Clark, spent 20+ years in the concert promotion business, and was affiliated with the Georgia Music Hall of Fame and the National Music Foundation, it is not as if I have not met plenty of “celebrities.”   I have.

And it is not that Ken Jennings wants to be a celebrity, or acts like one.   He does not, although he continues to maintain a high profile with books and television show appearances.

But I am among the millions who became addicted to the nightly drama of Ken’s relentless march through six months of daily victories and $2.6 million in earnings.   Ken Jennings is someone whom I RESPECT.

And he and his wife Mindy were as nice and unassuming as the persona he projected while appearing on your television screen every night.   Winning at Jeopardy is not about guessing cases or spinning a wheel.  Over the months, you KNOW that some of the most intelligent people in the country sought out the challenge of being the one to wrestle the buzzer out of Ken’s hand….    As it turns out, the person who beat him ended up losing the next night…so if an occasional mulligan were ever allowed, he’d probably still be on the show.

So when I took a reservation from a Ken Jennings for a fall foliage mid-week stay, I made a mental note that the caller had the same name as the Jeopardy winner and then I forgot about it.   But when Ken walked in the inn, and I pulled out the Ken Jennings paperwork, I knew it was him.   We know that everyone who stays at our inn is here for a reason, and that reason NEVER includes being made to feel uncomfortable…..so I never let on that I knew who he was….and if any of our guests recognized him, they did not let on to me (or hopefully not to him).

After he left, however, I did e-mail him to see if he would mail a personalized and signed copy of his book, Brainiac, to us as a gift for my mother-in-law, one of the Jeopardy faithful since before Alex Trebek.   It came today.

I do feel okay about putting him in my blog, however.   If you look at his blog, you’ll find a list of the celebrities he saw during his vacation to the East Coast.   Turnabout is fair play…

If anyone reading this would like to get an autographed copy of Ken’s books, read his daily blog, or hear of his upcoming appearances, I recommend his website, www.ken-jennings.com.