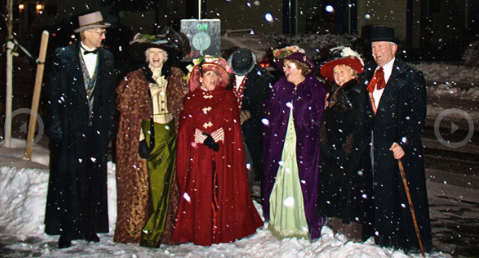 So what do you think about up to 30 of them?   In competition?    Worth a visit to what is already the quintessential New England town?

Welcome to the Lenox Caroling Festival.

The Berkshires, rated the #7 destination in the world by National Geographic Traveler is already known for its world-class events.   Boston Globe once pronounced this area “an aggregation of performing arts unmatched anywhere in America:”   Tanglewood, Shakespeare and Company, Berkshire Theatre Festival, Barrington Stage Company, Jacob’s Pillow…

But many of these organizations only present during the summer “season.”  The Lenox Caroling Festival was conceived to inspire a critical mass of varied performances during the “holiday season.”   Already, the December 10th weekend calendar is filling up:  Shakespeare & Company is presenting the “Santaland Diaries,” Ventfort Hall has a decorator showcase and other activities, the Lenox Library is hosting a Gingerbread House contest, there is a tour of homes/inns.   The calendar is expanding.   Bottom line….a visit to Lenox on that weekend is a guarantee of satisfying entertainment.

The Lenox Caroling Festival will feature approximately 30 choirs performing throughout the day, Saturday, December 10th, at six locations around Lenox Village (a town of only two square blocks).   You….the audience…will get to vote on your favorite performances.

The winner will be announced at Shakespeare & Company at 6 pm, where the winning choir will perform again.    First place is $2,000….a very generous bounty in the world of choraling competitions.   Lenox is serious about this!

Visit the Lenox Choraling Competition website, where local businesses have posted special offers and coupons.   Hampton Terrace has rooms available and is offering the Romantic Weekend Package and off-season rates.