December 28th at 8p.m. John Pizzarelli and Jessica Molaskey, a husband and wife duo, take the stage at the Mahaiwe for an evening of jazz and American song. The evening’s special guest, Bucky Pizzarelli, is a jazz guitarist and banjoist – as well as John’s father.

John Pizzarelli has been described as “madly creative” by the Los Angeles Times and “the genial genius of the guitar” by The Toronto Star. As for the family trio, the San Francisco Chronicle dubbed them “the First Family of Cool” and The New Yorker declared them “the von Trapps on Martinis.” The Grammy-nominated younger Pizzarelli was, of course, inspired by his father and took up the guitar at the age of 6. His career has spanned from clubs to Carnegie Hall, and included such highlights at playing Frank Sinatra’s 80th birthday show, and opening for a Sinatra tour. Pizzarelli is not afraid to embrace the pop elements of the jazz genre, and the classics of the American songbook. 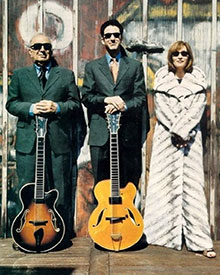 Bucky Pizarelli’s career really gelled with his appointment as a staff musician at NBC in the 1950s. In the 1960s, he became a member of the Tonight Show Band. He’s played for presidents, and he’s played with legends. An unusual bit of trivia? He plays a 7-string guitar, music geeks. That means he can accompany himself with a bass line, if needed, while playing the guitar.

This show is essentially guaranteed to entertain, and with style – attendees are encouraged to arrive in New Year finery. Regular admission tickets range from $25 to $80. A $100 ticket gains you entrance to a post-show reception with the performers. You can make your reservation to the show now, online, at the Mahaiwe’s website.