According to a tidbit we caught in the Boston Globe, Lord Julian Fellowes, creator of the PBS series “Downton Abbey”, English actor and writer of the screenplay for “Gosford Park,” will be honored at the Nov. 3 Edith Wharton gala at the Harvard Club of Boston. 2012 is the year of Edith Wharton’s 150th birthday. It’s probably not too much of a stretch to guess that

Fellowes is a Wharton admirer. He will be presented with the Edith Wharton 2012 Lifetime Achievement Award. 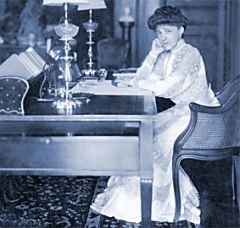 Past recipients include Martin Scorsese, Eudora Welty, and Alice Munro.

And here’s another Wharton-commemorative event as her 150th birthday year moves toward a close: the Berkshire WordFest 2012. WordFest is “a biennial celebration of words and ideas in one of the most beautiful settings in the Berkshires. Organized by The Mount, WordFest brings together acclaimed writers and passionate readers for talks, readings, conversations, and discovery”. This coming weekend, September 14 though 16, Wharton’s literary legacy will be honored with this meeting of the wordy minds. Included among the participants:

Enjoy this collection of classic quotes from the birthday gal…