ran a story calling BMD’s gins their “new
favorite… in American gins”. Maxim also dubbed the BMD rum their favorite (guess they’re not martini drinkers), and GQ also cited their rum in a January story on being a “liquor locavore”.

Berkshire Mountain Distillers are now reaching creatively beyond their own corporate borders to collaborate with Sam Adams on a project destined to intrigue the tastebuds: They are distilling Samuel Adams Boston Lager into a brand new whiskey.

Casual whiskey drinkers may not realize that whiskey is a spirit that is distilled from beer. Normally, that beer is nothing special until it is aged whiskeyward. In this particular case, they are starting with a far more palatable beer, and after it ages for a minimum of two years, it will be interesting to see what is brought forth from the parent beer. We are fully anticipating a world-class result.

Berkshire Mountain Distillers are the also the creators of Ethereal Gin, a family of botanical spirits sure to complete your Berkshires experience with classic cocktail-hour style. 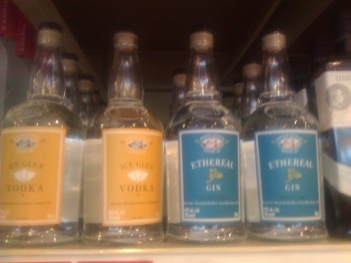 There are three members of the Ethereal Gin family, each a gin-lovers dream: Batch 5, Batch 6 and Batch 7. Batch 5 showcases a blend of flowers and spice, with notes of violet, honeysuckle, citrus and vanilla layered over cinnamon, clove and grains of paradise. Batch 6 pairs citrus and berries for a botanical blend of rosehips, elderberry, blueberry and lime peel. Batch 7 is a bold, brave standalone that also perks up a classic cocktail. Lemon peel, elderberry and rosehips are the opening act for a peppery finish.