A peek at the 2013 performance schedule for Shakespeare & Co. reveals a cornucopia-bursting bounty of classic riches. Shakespeare himself is well-represented, but he is in very, very good company indeed, in this dense, luxurious season of theatre.

Love’s Labour’s Lost, Richard II, and a Midsummer Night’s Dream are joined by Mother Courage And Her Children (Bertolt Brecht), The Beauty Queen of Leenane (Martin McDonagh), and Moliere’s Les Faux Pas. The majority of these performances take place just a 9-minute walk from 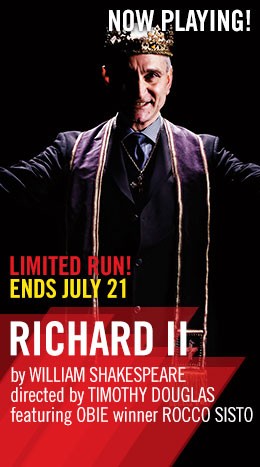 The setting for Shakespeare & Co’s production of Love’s Labors Lost has been updated, for this production from Shakespeare’s time, to the 1940’s. According to the Berkshire Eagle, director Lisa Wolpe has crafted, with her cast, a fresh production that takes pains to use the language, rather than rely solely upon physical comedy for laughs. This classic battle of the sexes runs until September 1.

Richard II is a far more serious play, full of politics, war, and shifting alliances, as a king seals his own fate. In an interview with the Boston Globe, director Timothy Douglas says “Richard was the first king in his family who practiced diplomacy first before going to war . . . so I consider him a visionary.” He also invites the audience to draw their own conclusions about who, in this broiling tale of succession, is right, and who is wrong. This show has a limited run, until July 21.

Another season highlight, and one that puts the “& Company” in Shakespeare & Company: Moliere’s Les Faux Pas. As is the case with all things Moliere, this show should be uproarious, clever and fun. According to Broadway World Boston, “With a recipe that includes pirates, clowns, sword fights, food fights, and hilariously-failed schemes, there is something for everyone in this madcap jaunt.” This saucy comedy runs through August 24.

For more information about these shows, and the rest of the S&C season, call the Box Office at (413) 637-3353 or visit www.Shakespeare.org.