July 13th, don’t miss what is sure to be a very special event in this year’s Tanglewood 2013 Season – a performance of Bernstein’s West Side Story score. Much more than a concert, it’s a live movie experience, with the newly remastered film shown as the orchestra plays along – complete with original vocals and dialogue.

West Side Story is a truly American interpretation of an old, old tale – of a love that cannot be, but which the lovers cannot turn away from. Leonard Bernstein’s score 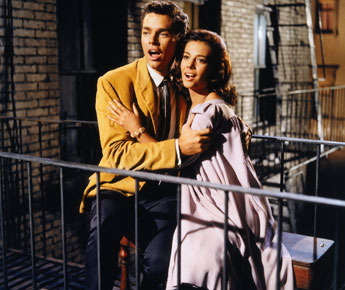 simultaneously evokes a specific time and place, but is also an unforgettable music experience that has made the story a classic. The film won ten Academy Awards following its 1961 release.

This will be the debut of conductor David Newman, with the Boston Symphony Orchestra. The performance on the evening of July 13th will be preceded by a Saturday morning rehearsal at 10:30am. The rehearsal features the orchestra only — the film will not be shown and the entire score will not be performed. It could be a very interesting experience, however, for fans of the score, or those who simply love a behind-the-scenes peek.

Tickets for this special performance are $20-$150 and tickets for the sneak-peek morning rehearsal at $10-$30. This will be a popular performance, so make sure to book your Hampton Terrace rooms well in advance – they will fill, and you don’t want to miss our breakfast as a part of your Tanglewood experience.