Those of you who have met us know from the moment we say hello that Susan and I are originally from the South – Georgia to be exact. We came to the Berkshires in the early 90s when I became the director of development for the National Music Foundation, of which Dick Clark was the Chairman of the Board.

In the mid-90s, I had the pleasure of bringing Wynton Marsalis and his Orchestra to the Berkshires and working with them directly.

The concert hall was in a larger building, which had an indoor basketball court. I was driving him down from the Crowne Plaza in Pittsfield that afternoon for sound check and mentioned the set up. He said, “you and me, Stan, one-on-one.”

We played one-on-one in the afternoon and then his band members joined in. At the intermission of the show, he and his band were playing in their tuxes. After the show, they resumed their game and some people from the audience, who had heard about intermission, went in to watch.

Wynton was in town for a concert at Tanglewood last night and stayed at Hampton Terrace. When I checked him in, he and his band-mates and equipment guy remembered our match immediately. Wynton saw the basketball hoop in the back yard and challenged me to a rematch. Not wanting to embarrass him in front of his band, I politely declined but I did catch him on video making a few great shots.

(To see the video, check out our Facebook page.)

Next time, Wynton. Next time. 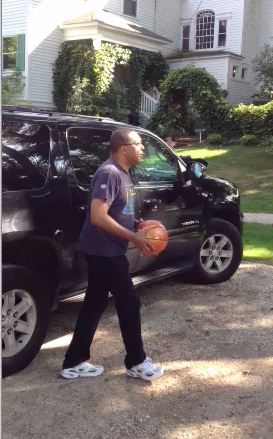